Behind the Scenes: “Shooting On Location At The Largest Building In The World” 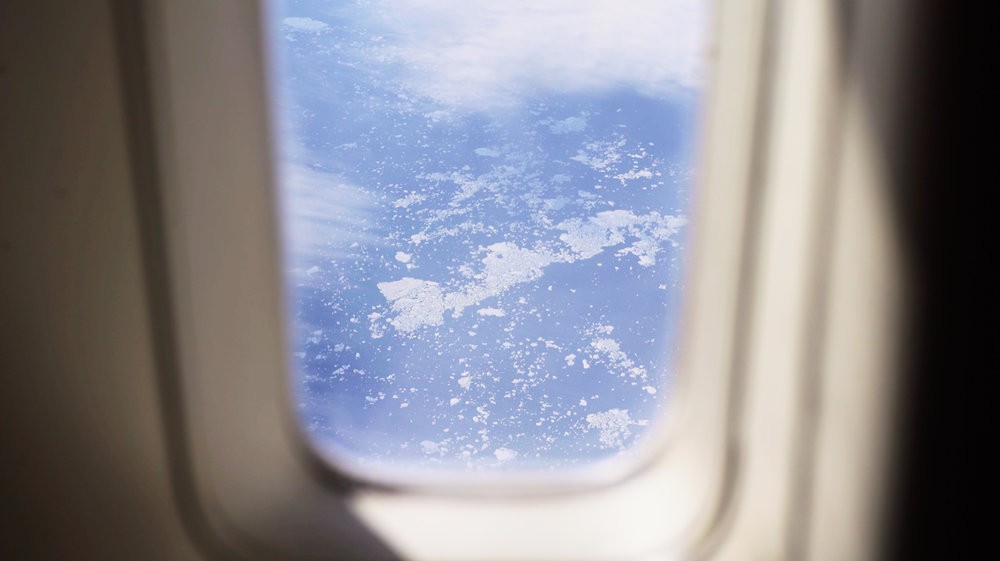 I took the above photo 30,000ft above Canada, on our way to Washington state. A hundred years ago, it would have been impossible to achieve. Now, I can take this photo, have a sandwich, watch a film, and go to bed – all before touching the ground.

Human flight is a fascinating miracle of the modern world, so it was with great excitement that we were on our way to film at the factory where the very aircraft we were flying on would have been built; the Boeing Everett facility, in northern Seattle. 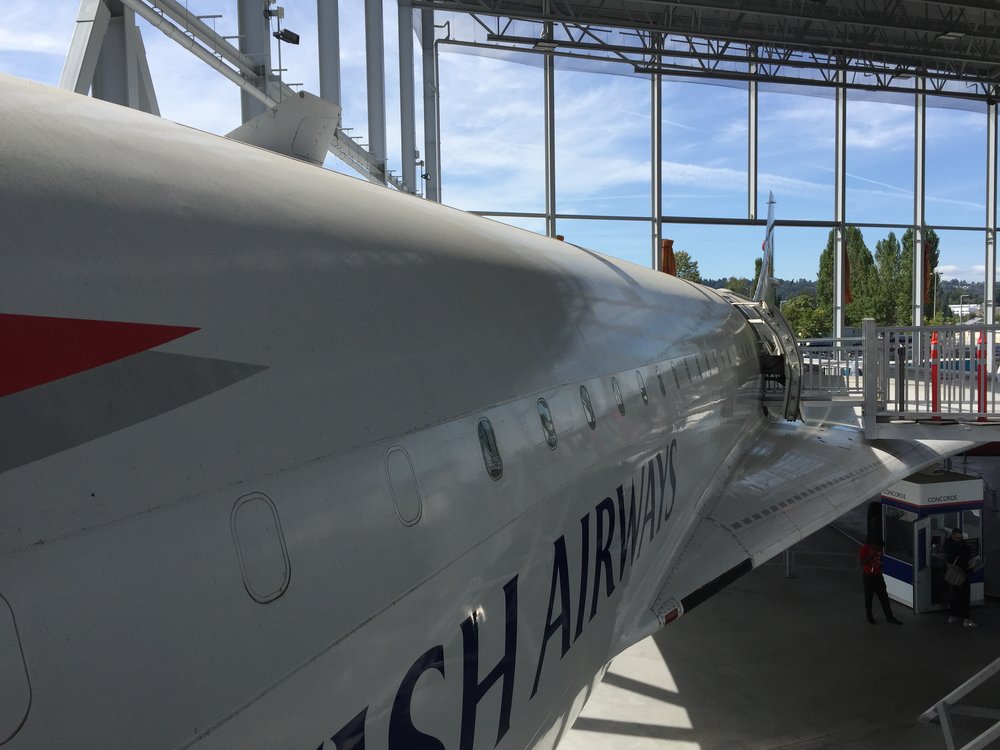 IAG Cargo had commissioned us to create a series of films showcasing some of the incredible cargo that they carry across the world. First on the list was Boeing’s aircraft parts. The idea was that in showing the huge, complex, specialised production of Boeing’s aircraft, we could convey the importance of every single part – and of its correct and uninterrupted delivery.

The brief was to create something equally as bold and evocative that would do the building and it’s aircraft justice. Key to IAG was transmitting the 24 hour, restless, always ready attitude that has made the company so successful.

We needed speed. Shots that moved, fast, and never stopped. Not only would this create energy and pace, but bring a new dimension to the planes being built, revolving around them and constantly changing the perspective. The challenge was to obtain these kinds of shots in what was arguably one of the most expensive and sensitive factories ever built. It’s also worth mentioning that this particular Boeing base is, as Jeremy Clarkson would put it, the largest building… in the world. 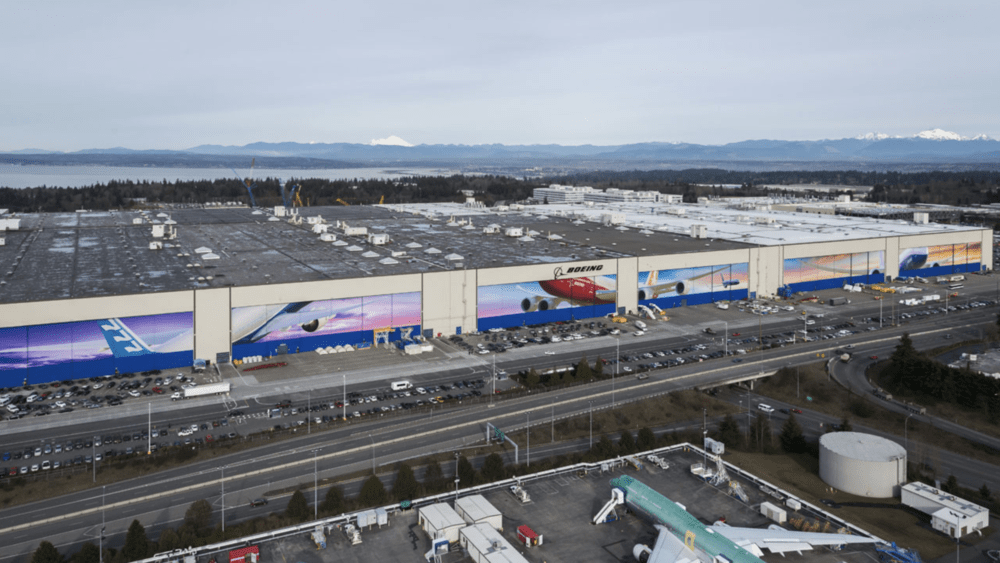 We arrived via official Boeing (disappointingly ground-level) transport. It took nearly 5 minutes to drive from one end of the factory to the other. It was truly vast – just one of the eight divided sections of the factory was already bigger than any building I’d ever been into. We were told by our guide that when the building was first constructed, actual clouds would form near the ceiling, as it was so large it created its own microclimate. Wings, fuselages, nose cones, and landing gear were all around us.

Arriving at our base for the day, we unpacked our kit; Two URSA Mini Pros, Movi M15, and a set of Canon CN-E Prime’s. I would be handheld on one URSA, whilst Ian would be using the M15.

The factory is so large, that electric golf buggies are used to navigate around the factory. Our plan was to put Ian on one of these buggies and drive around the factory floor at the blistering top speed of 15 miles per hour. Using the Movi in conjunction with the buggy meant ultra smooth, fast, dynamic movement which was perfect for the feel we were after. 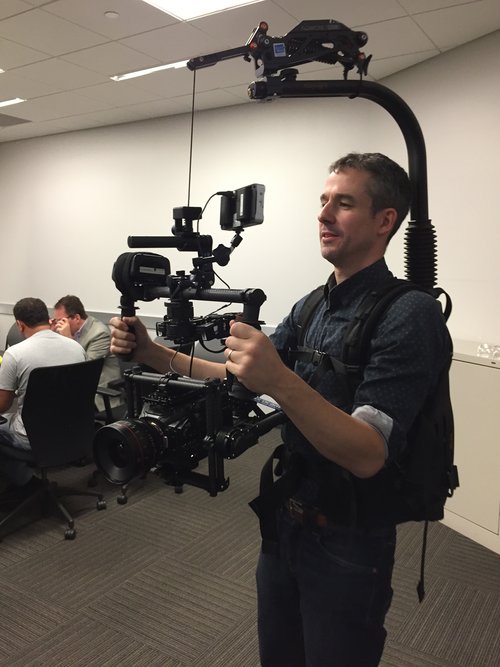 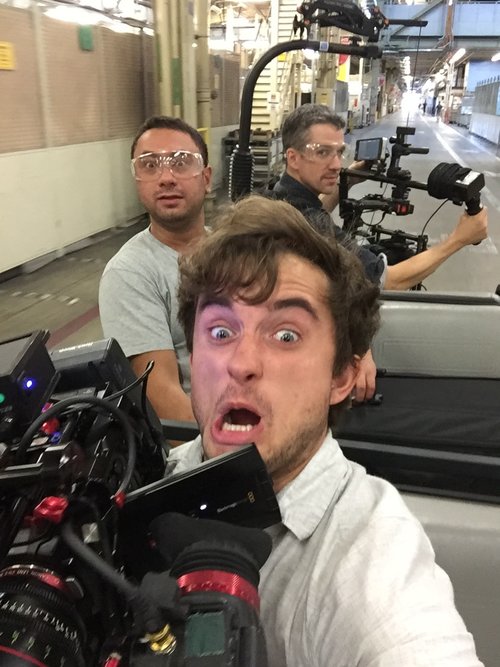 I’d be getting shots with more of a handheld feel to them, plus jumping off the buggy to pick out some detail shots.

This set up worked extremely well, and we managed to cover a great deal of the factory, capturing those sought after fast motion tracking shots, with blurred foreground elements whizzing past and an ever-changing perspective of the aircraft parts.

Later we headed outside to get what would be the final shot in the edit – a slow ease-out on a Boeing branded aircraft. Again, using the combination of the buggy and the Movi replaced the need for a track. 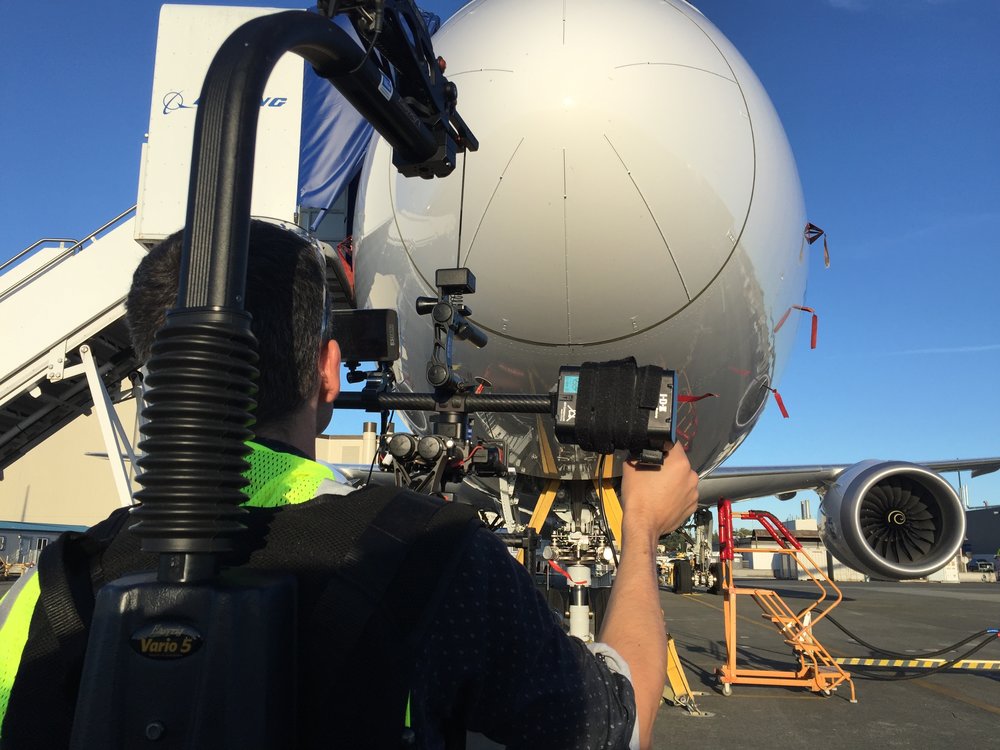 The next day we were tasked with shooting an interview with a Boeing representative. Again, this needed to be striking. We didn’t want to just do a talking head on a 50mm.

Whilst walking around Boeing’s own airport, we found a Boeing 777 in a hangar. This was an absolutely ideal place to film the interview. Being inside, it eliminated weather change, sun glare, wind noise, and lighting changes. We were keen on achieving a striking interview look and feel. To do this, we mounted the second camera low, with the 14mm, pointing up at the subject with the aircraft in the background.

This was the result: 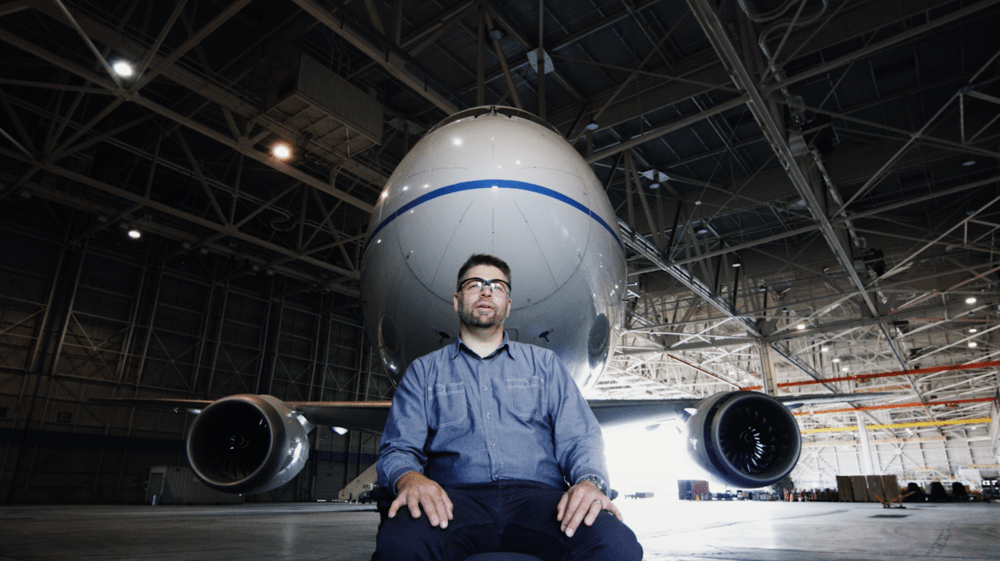 It was a perfect fit to the footage we’d captured on the previous day. Of course this angle was used sparingly, as it is quite extreme – but it certainly added to the feeling that this wasn’t a typical corporate film. The one problem we did have was a loud metal clanging sound caused by a faulty door mechanism. However, it was infrequent enough that we could shoot around the noise.

One issue we did have when visiting the factory the previous day, was we had no access to inside the cockpit of any aircraft. It was important to us to show not only the external, mechanical elements of the aircraft coming together, but to also at least hint at the deeply complex and difficult task of installing a Boeing aircraft’s electronics. So, to do this we headed out to Boeing’s customer centre, where we grabbed a few quick shots of a simulator cockpit. We spent a while rolling constantly, just so we could get the “just switched on” shot – where the lights on the dashboard flicker into life. It was important that every shot had this feel that the aircraft was being built before our eyes. 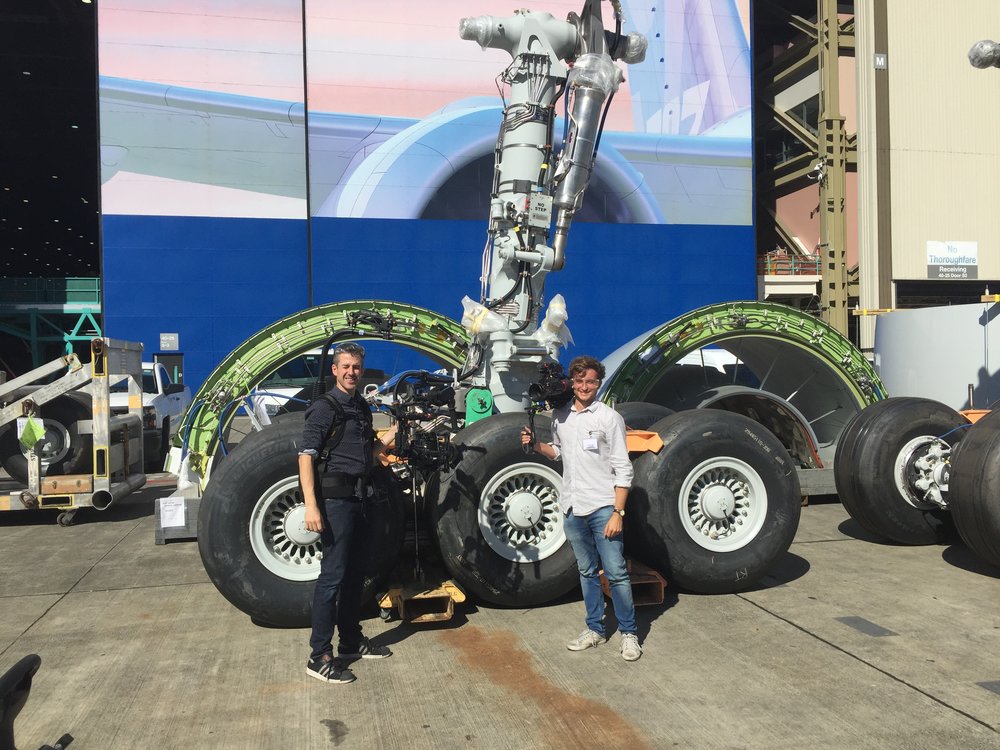 Ian and I are dwarfed by a set of landing gear

We wanted to go up the iconic Seattle Space Needle to celebrate, however we were distraught to find out it was closed. So we rounded off our trip with what is surely the only reasonable way to round off a trip to the US; eating burgers that would probably kill us. 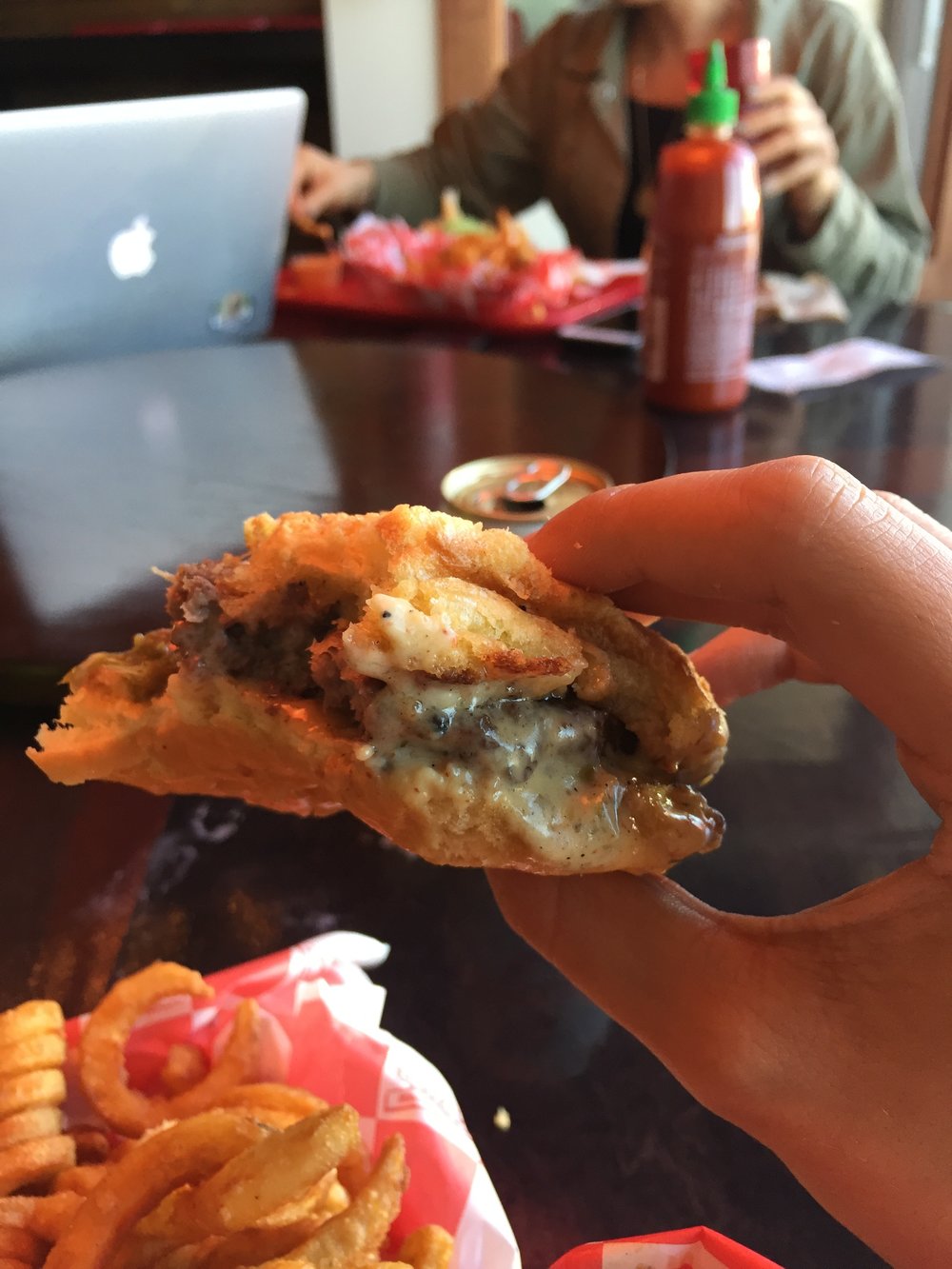