Behind the Scenes: “Building a set in one of the largest pharmaceutical plants in the world”.

I’ve found that one of the best things about being in the film production industry is the chance to consistently be exposed to a whole range of slices of life, all around the world. This time was no exception. As part of our ongoing work with IAG Cargo, we were this time sent to India to document the amazing work of Biological E – a pharmaceutical company that produces over 2 billion vaccines every year. Once again, the Social Films team had the opportunity to experience a part of a unique industry that we’d rarely see otherwise.

As this film was to be part of the same family as the IAG Cargo series, the brief was to keep the tone of this one similar. By this I mean keep constant motion through the shots, the same interview format of centre framed talent with an ultra wide B cam, same pace of editing, same musical mood, and same logo and text format.

We wanted this film to feel precise. This meant ditching any handheld shots and focusing on clean, symmetrical tripod shots complimented with some wider Movi tracking shots. Although these tripod shots wouldn’t have camera movement, they would be close ups of items or instruments or machines in the factory that moved – making sure that each shot in the film would contain movement. 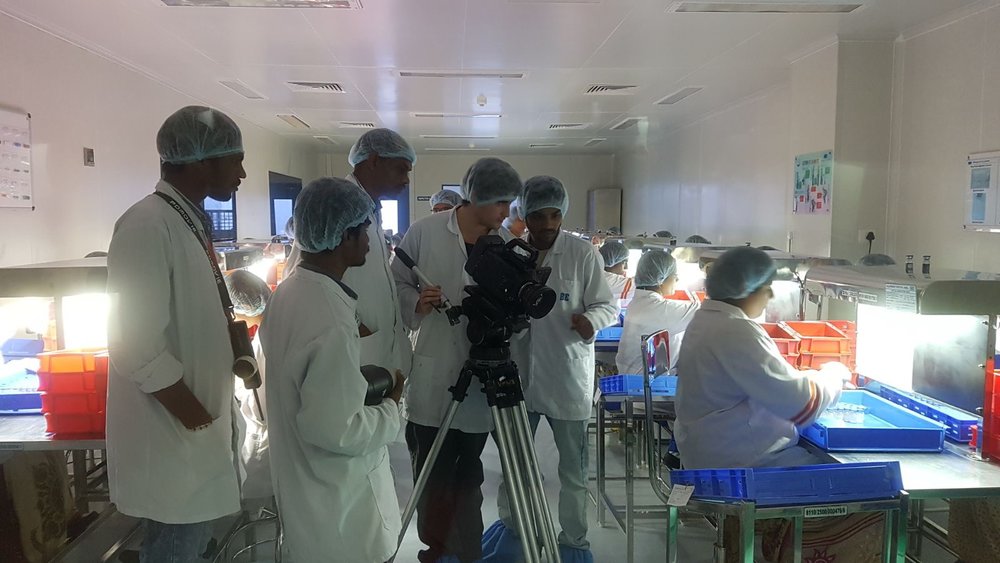 Filming the quality control with my four man crew.

Arriving at Biological E HQ was an ordeal in itself. India is infamous for the hectic roads, and as a veteran of the country I was quietly smug about the situation, believing I was used to it. I was not. Our hotel-certified driver seemed keen on going head on in a game of chicken with just about any other vehicle coming in the opposite direction. After reassuring him that we really, REALLY were not in a rush, he calmed down enough for us to stop sweating.

We had a tour of the factory as soon as we arrived. Hairnets, shoe covers, and copious amounts of hand sanitiser were donned, as we walked through spotless corridors, peering into never-ending glass windows, revealing rooms full of exotic machinery and rows and rows of vials. This was absolutely perfect, and exactly what we were after. 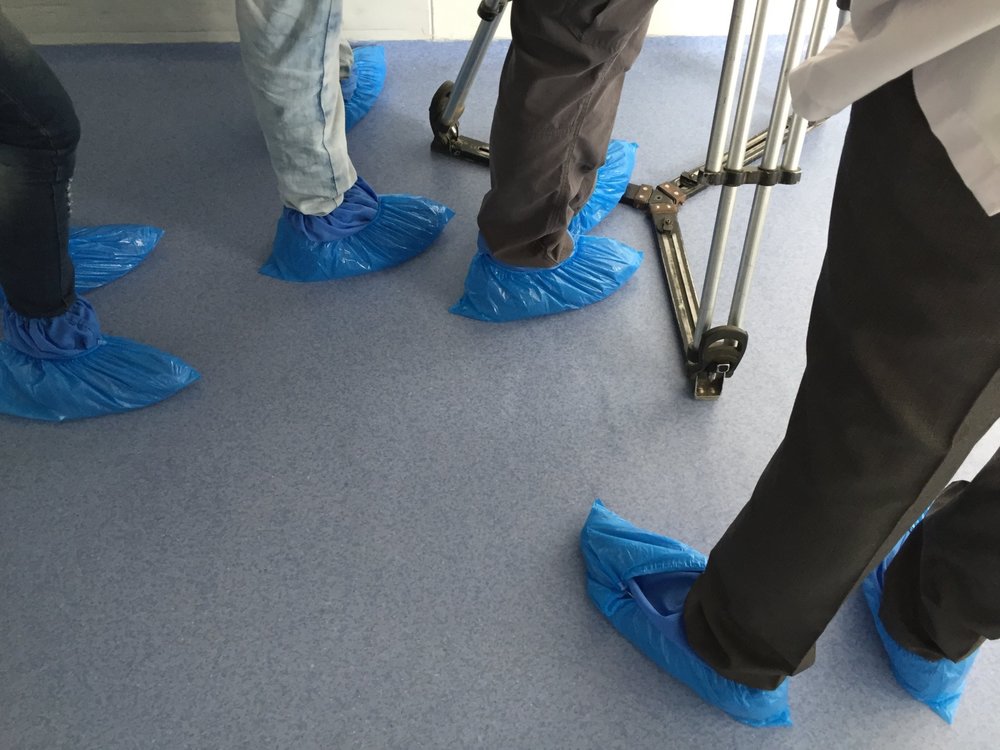 One thing I haven’t mentioned at this point is our filming setup and crew. Due to the lengthy process of a carnet, and the good exchange rate the UK has with India, it made sense for us to hire the equipment in country. However, Indian film union rules are very strict, and with every piece of equipment we hired, we had to also hire an operator to use it. So that meant with two URSAs, Canon CN-E primes, a Movi M15, lights, and audio kit…. we had around 7 members of staff, not including myself, Ian, and Eloise & Adam from IAG Cargo. 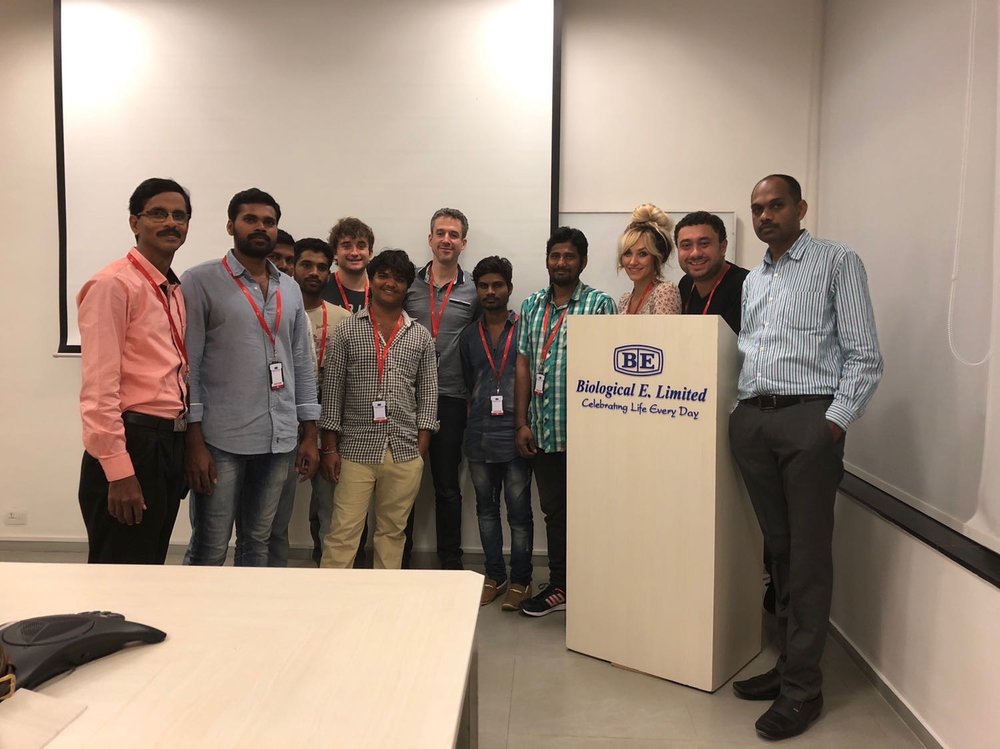 The full extent of our Indian workforce…

We met them all after the tour. They were all very friendly and professional, though language was a bit of a barrier – entirely our fault, of course, as we’d failed to learn any Telugu before we arrived, rather embarrassingly. I also have to say, that although initially we didn’t think we needed all this crew – they became essential to the shoot, helping move the equipment around what was a vast facility. 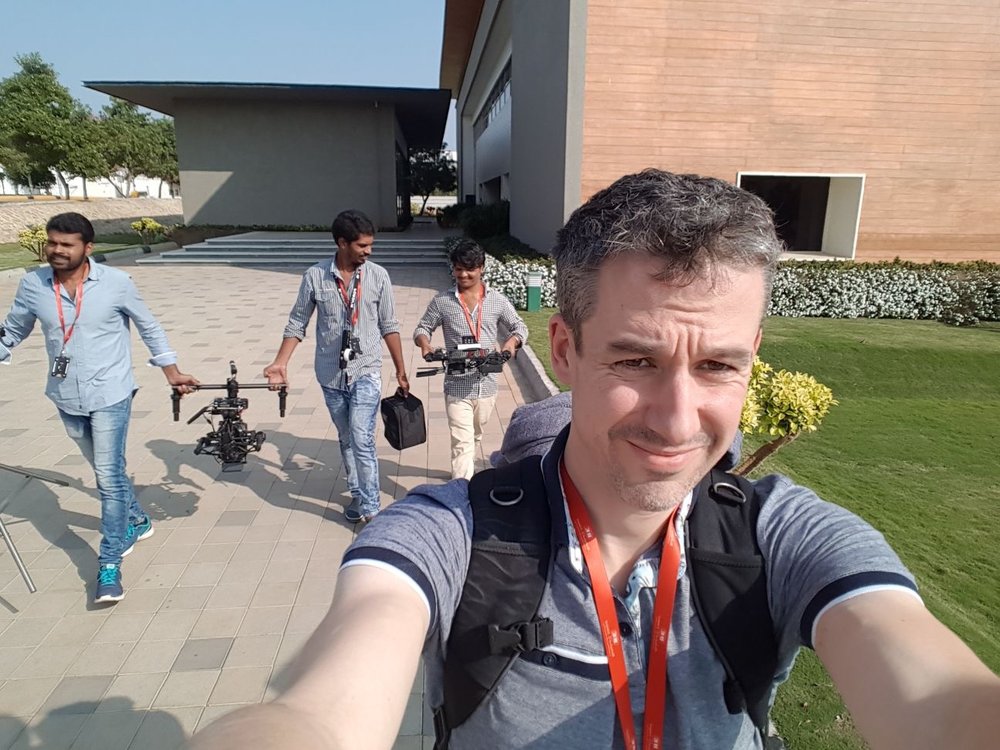 Ian taking a quick selfie whilst moving the kit between labs

We decided to film the Interview first. However, this wasn’t straightforward. We found some amazing locations, but none without loud and intrusive factory sound. This was a challenge – how could we get the dramatic Interview shot we needed, yet also capture clean audio? Well, part of the factory was an inactive room full of leftover machinery from their operations. Our idea was to take these machines, arrange them against one of the walls of this building, light it accordingly, and use this as a backdrop.

Setting up in the inactive room 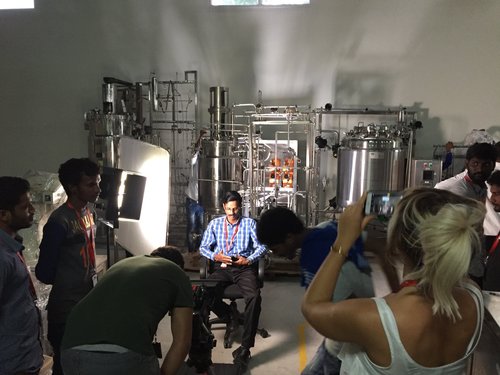 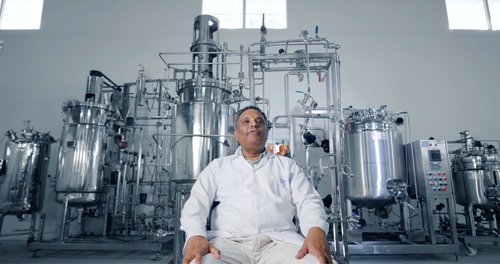 This is when the help of a large crew became invaluable – moving the machinery around was no easy feat. In the end the shot looked fantastic, and we were able to shoot the whole way through with no interruptions. It blends seamlessly with the rest of the film.

We shot all the B Roll in the second day. It was easy pickings; everywhere you looked there were shiny pipes, huge vats, dials, long corridors, chains of vaccines, labelling machines. The Movi was perfect for those long sweeping shots, whilst I picked out some interesting close ups. However, we were slowed down by all of the crew having to re-do shoes, hairnets and sanitiser after going into every part of the lab. This meant that in the end it was a bit of a hectic day making sure to get a wide variety of footage, but we managed to pull off some fantastic shots that really enhanced the film. We really tried to emphasise symmetry, precise motion, and details of colour.

Back in the edit suite, I could tell immediately that we’d pulled it off. The sweeping tracking shots cut nicely with the static shots, the interview looked fantastic, and most importantly they all came together to form a coherent whole with a strong identity: clean, precise, driven, and showing the scale.

India itself is a country that I always love returning to. The people are some of the warmest I’ve met, the culture is rich and steeped in history, and if you can stomach it, the food is amazing. It was a crazy couple of days, and a fascinating glimpse into the pharmaceutical world that I would never have seen otherwise. We hope that the films we’ve produced from this trip tell the story in the most engaging way possible.