When the Location is the Star of the Show

In the numerous chats by the coffee machine in the weeks leading up to our trip, I heard the same thing over and over again; “You’re going to Japan? I’ve ALWAYS wanted to go there!”. Indeed, there is a certain allure to the country that sets it apart. I too had always been deeply curious about the country, and now I had the chance to see it for myself. IAG cargo has been shipping the exhibits for the British Museum’s Citi Manga exhibition. So we were tasked with discovering one of the unique artists behind some of the work.

Ishizuka Shinichi is the acclaimed author of Blue Giant Supreme and Vertical. His mangas based in the current time and the real world have sold multi millions of copies. Our job was to show him, his story, his artwork and the distinctly Japanese identity of Manga. The unique challenge to this project was that the interview would be conducted entirely in Japanese, so we needed to be able to translate and also break it up into small enough chunks for editing. Our secondary aim was to capture the essence of Tokyo’s cyberpunk style. The tall buildings wrapped in glowing lights with the hustle and bustle of crowds below, people in strange outfits and crazy tech around every corner.

We took a redeye flight and landed into Tokyo in the late morning. After checking in to our hotel and having a power nap, we headed out to Tokyo as the sun started to set. We decided to shoot the Tokyo b-roll entirely at night, the glowing streets against a jet black sky carrying much more impact than stark daylight. On our first night, it was raining, which was a mixed blessing. On the plus side it meant that the streets were shimmering with reflections, everyone had their umbrellas out, and it added just that bit extra to the Blade Runner vibe. On the downside, it was freezing cold, and our shooting was limited in order to keep the kit dry. 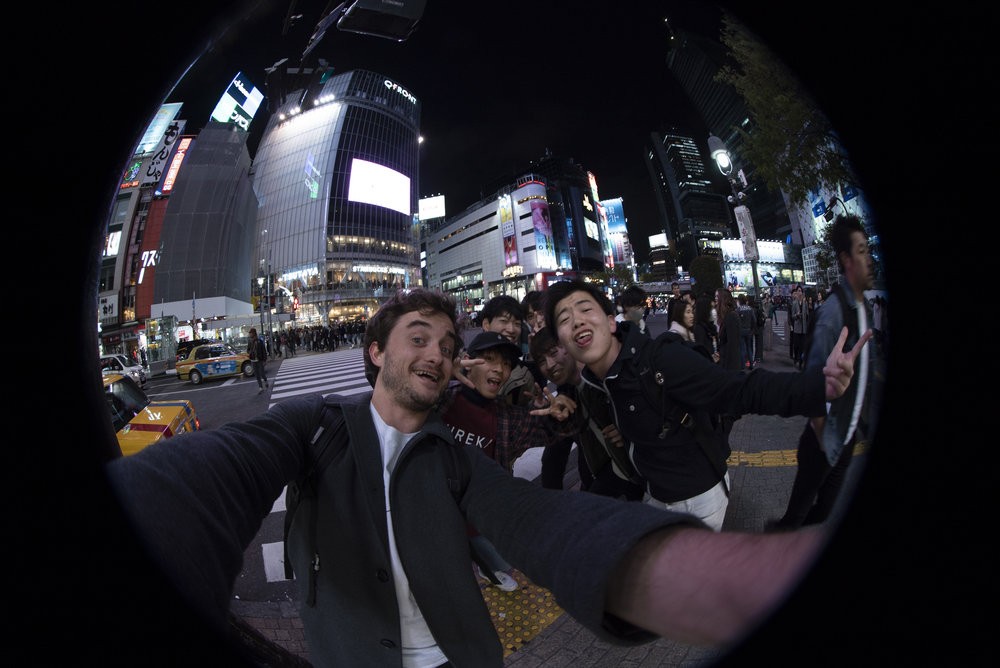 Making friends in the city was surprisingly easy when shooting!

Said kit consisted of one Blackmagic Pocket 4K and a Sigma 18-35mm on a Ronin S, and one Sony A7S with a set of Samyang primes on a pair of cold, wet hands. We needed a lightweight rig because we had to shoot fast. Big, complex rigs take time, and in any case were unnecessary; in tests, the new Blackmagic Pocket camera had absolutely blown me away with its image quality, especially when paired with a speedbooster. I cannot believe that this camera costs only £1k.

Ian would primarily be on the Blackmagic, shooting controlled, smooth shots of the city, absorbing the atmosphere of this fascinating place. I was interested in using the Ronin to tilt the camera in some odd ways to create surreal effects for a faster paced 30 second cut. I was on the A7S, shooting hyper-lapses. The hyperlapses would drive home the key themes of technology, futurism, and speed, but also inject energy and pace to the films, whilst adding a sense of the alien that you certainly experience walking the streets.

After a successful night shooting in Shinjuku, the following morning after the best breakfast ever (a whole plate of fresh salmon) we headed to Shinichi’s studio to shoot the interview. We wanted to continue with the dark, neon lit feel of the rest of the shoot. So we brought out with us some blackout blinds, cyan and magenta gels and LED panels. This helped transform their studio into something that seamlessly blended with the rest of the film. 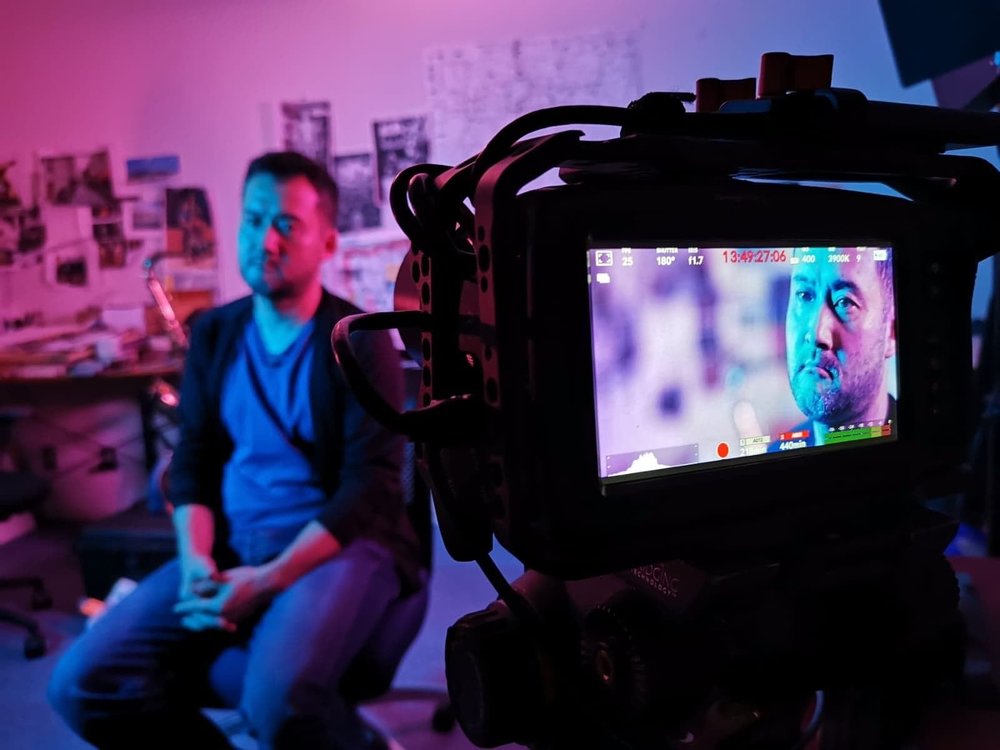 To tackle the language barrier, we had hired a translator for the interview, who would record the translation out loud into her own microphone after Shinichi spoke. The day after the interview, I collated all of the answers I needed. However, I needed to cut these down into shorter chunks, as I wouldn’t want the whole answer in the film. To do this, I enlisted the help of Hiromi, the exhibition curator. She kindly helped me go through the answers, and singled out the snippets that I needed. What was really interesting was that some of the answers couldn’t be split up. The way in which the sentence was structured in Japanese meant the two meanings could not be separated in the audio. Despite this, by the end of the day I had the building blocks set for a really nice edit.

That evening we went out to other areas of Tokyo to shoot. Instead of the atmosphere and futurism of Shinjuku, we were focused specifically on riding manga on the streets. We needed to get across this sense that it was ingrained into the culture of the place. Luckily we found a lot of manga around the Akihibara area. Unfortunately, a lot of it was, shall we say, inappropriate. However after hunting for quite a bit, we found some real gems that looked great in the final film.

At this point our shoot was a wrap, so naturally we decided to go out for some incredible Japanese whiskey to celebrate.

Just before a well earned old fashioned (or three). 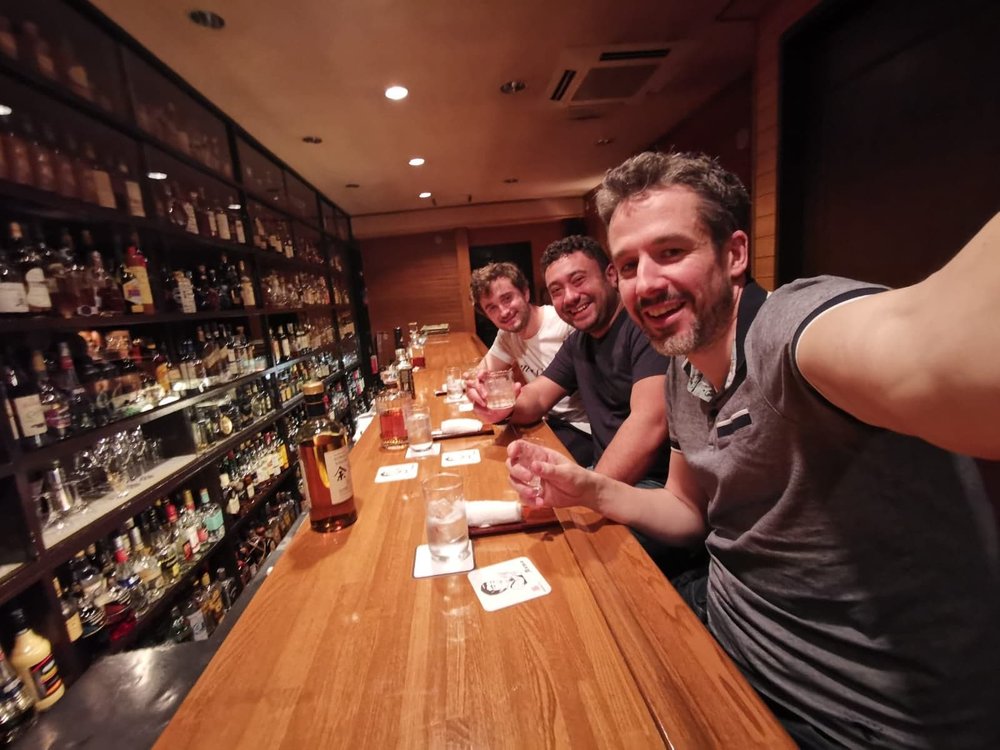 It struck me how easy Tokyo was to shoot in. I didn’t have to work hard to find breathtaking shots. The  place is so naturally photogenic in both its luminosity and structure, that everything falls into place the moment you point the camera. Not to minimise the credit to our team; all four of us worked incredibly hard and for long hours to pull off what was one of the most exciting and aesthetically distinctive films we’ve ever made. 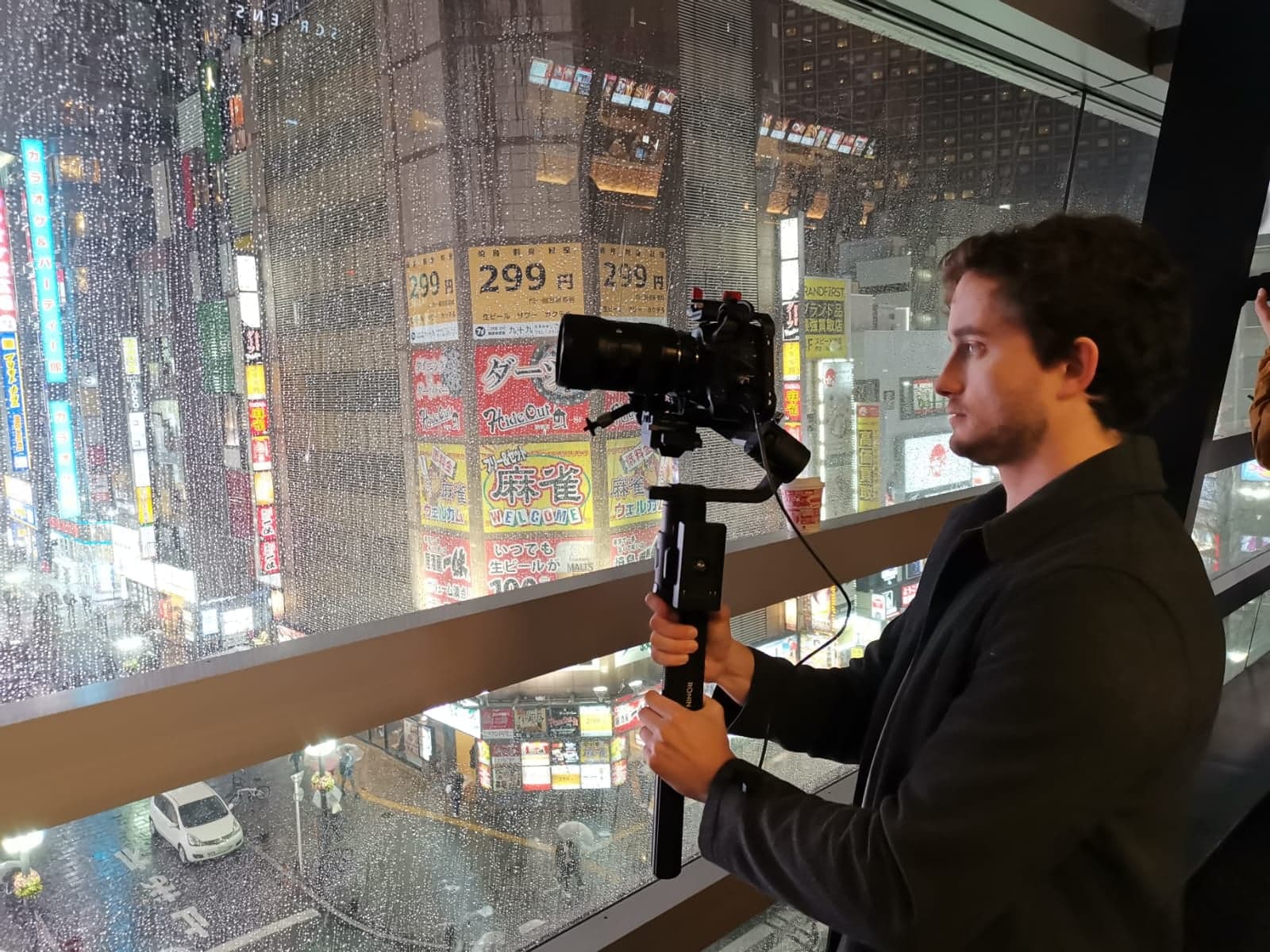 Throughout our time shooting in Tokyo, it became apparent just how amazing this city is. From the mini bullet train taking your sushi to your table and the intricate gardens, to the comforting ramen and unashamed technophilia, it’s a city of contrasts that captured my attention in a way no other place had. After a few extra days exploring Mt. Fuji and Hakone, I took my flight home, almost immediately wishing I were back there.

THAT’S A WRAP! ASK US QUESTIONS AND LET US KNOW WHAT YOU THINK BELOW!